The price of oil is on fire. Like most commodities, there last year has been very good to oil speculators. Over the past couple weeks, the price topped $70 on the WTI. 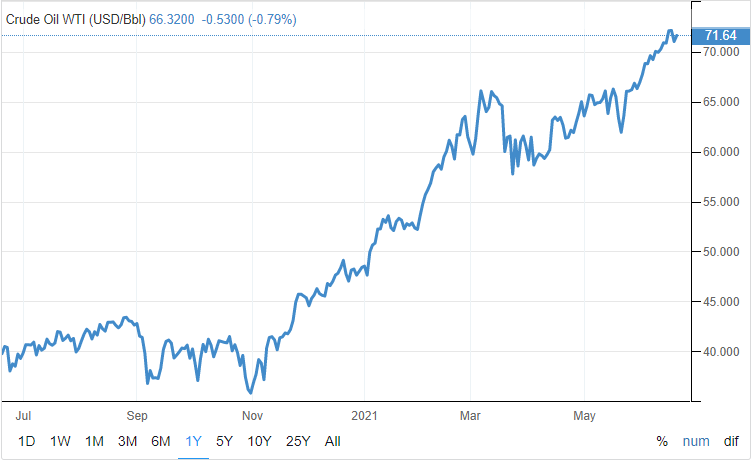 What most people are wondering, is this a temporary move higher or something more permanent?

Looking at a longer term chart, we see this is far from uncharted waters. As we can see, the price of oil was higher a couple times in the past 10 years. 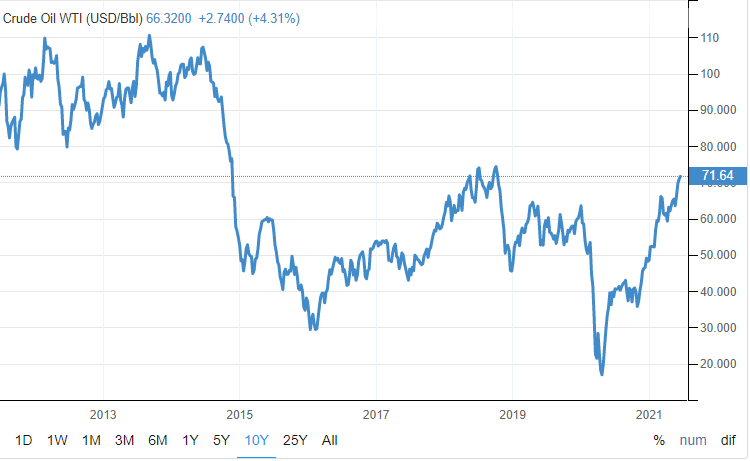 This chart shows how were are just getting back to the 2018 level in terms of pricing. Of course, we are still a long way from the $100+ per barrel pricing that we saw earlier in the last decade.

It is important that, as recently as the beginning of 2020, we saw a glut of oil on the global market. The frackers in the United States kicked production into overdrive. This, coupled with OPEC and other oil producing nations, saw supply skyrocket.

COVID-19 sent demand for oil plummeting. However, the supply was also cut a great deal. The following chart from Investing.com shows that the oil companies were already starting to cut their rig counts long before COVID. The lockdowns only sent that into overdrive. 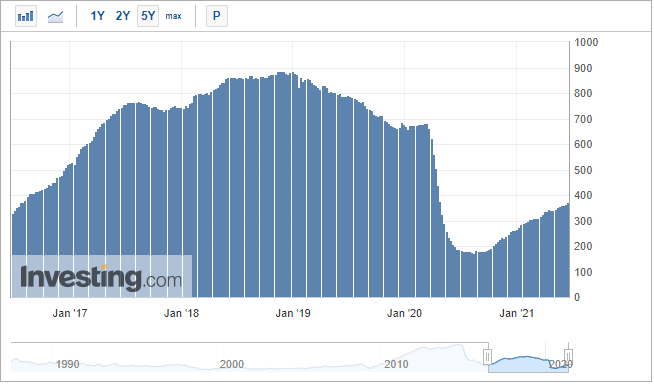 In the past, technology was a solution for higher prices. This might not be the case anymore. We could be looking at a sustained run which puts oil prices at a much higher level. It is a move that would be fatal for a global economy that is already on thin ice.

Oil production is a capital intensive business. It is also one that affects almost every segment of society. Many theorize that if the mortgage back securities did not wipe out the economy in the Great Recession, $140 per barrel of oil would have. There is no way the economy can withstand such pricing.

Here is the annual capital expenditures by oil companies over the past decade. We also can see from the forecast that the picture is not slated to look much rosier. This is something that has the oil traders mouth watering. The price of $100 per barrel oil is back on the table according to many.

Moreover, supply from the oil supermajors could be also coming off, due to shareholder and environmental pressure. In the United States, the Environmental, Social, and Governance (ESG) concerns, as well as the U.S. Administration’s push toward renewables and away from fossil fuels, would also contribute to lower supply and lead to a supply crunch in coming years, according to Maglan Capital’s Tawil.

The world’s largest independent commodity traders are also bullish on oil, not ruling out $100 oil.

Oil, like most commodities, is a simple supply/demand equation. That is what it all boils down to long-term. If the oil companies end up cutting production, as the capital expenditure chart shows, then we are going to be faced with higher oil prices. While the economy will not likely open up to the point it was before COVID, there is more activity to come. This will stimulate demand at a time when supply is dwindling.

As the above quote stated, this could be a multi-year process which is also common for the commodity industry.

We also have to factor in that many feel oil is the king of all commodities. The reason for this is because it tends to drive the prices of many others. If oil enters a bull market, the price action can spill over into many others. It is all lining up for a commodity bull market that could extend into 2024.

Technology will eventually be the great equalizer. Given enough period of time, it can either develop new ways of getting the product out of the ground or generate alternatives. That is not going to happen overnight with will put the world in a very difficult position.

Oil goes into a lot more than just transportation. It affects a great deal of the energy sector as evidenced by the fact that most peaker plants are still fueled by oil (or coal). At the same time, all plastics are petroleum based. We also see products such as vanilla derived from this source.

There is a chance the greed factor enter the equation. This is something that often happens in the market. Many economies like Saudi Arabia and Russia are heavily dependent upon the revenues generated from oil sales. Even though there are often agreements between the countries, each end up operating in their own self interest.

Higher oil prices might simply be too tempting to resist. The more one country can pump during a period of high pricing, the more money rolling into their treasury.

In the short term, the chart does appear ripe for a pullback at some point. Many of the commodities are starting to roll and we are seeing some of the economic news, especially out of Europe not look so good. Couple that with a print on retail sales in the United States that did not excite too many and we could be in for some economic headwinds.

This could pull the price down for a spell. The $50 level is one to watch since that looks like, with the supply equation the way it is, a strong level of support. As long as it stays above that, we need to give the benefit of the doubt to the supply situation.

If you found this article informative, please give an upvote and rehive.

I don't think oil will move up as much given the push towards renewable energy. As it is, it means that oil itself will probably start dropping in how much is used to power cars and they are also moving towards solar, nuclear and other sources of energy. I guess in that case oil would just be used as a supply for making things like plastic.

You could be right but I would pose the question on what time frame? Sure we could make the case that renewable energy is going to stamp out demand for oil, but how quickly.

Also there is the supply side of the equation: the less oil produced means higher prices at the same demand. The shift to renewables is occurring but not at a pace to affect the demand over the next year or two in my opinion.

I think the time frame for renewable to be cheaper than oil/gas to be in 1-2 decades. When that happens, it will become more mainstream but I guess it will be at least a decade long process.

Prices are really fluctuating and this is really not good

That is standard in markets. Price go up and they go down. So I am not sure how it isnt good when it is what markets do.

Hey @taskmaster4450le, here is a little bit of BEER from @pixresteemer for you. Enjoy it!

Just like everything else in the asset and commodity world, prices are manipulated by the big players and the little guys just get to suffer. I wonder what all the fracking employees who voted for Dems are thinking right now, now that the price of oil is high enough for them all to be running full tilt? In the meantime, China continues to pour pollution into the air and US companies are forced to eat all the extra costs associated with going to "clean" energy. Damn, it must be nice to be a career politician. Always get to have your cake and eat it too.

Just like everything else in the asset and commodity world, prices are manipulated by the big players and the little guys just get to suffer.

Well I am not sure this is in play here.

After all, would you pour billions into expansion if your product was being blamed for all kinds of horrific things and you were being framed as the boogeyman. The oil companies are being sued for selling their products due to "causing" global warming.

Imagine if oil does get into the bull market, that would be incredible to lots of investors

Oil is something that's a bit of random, i don't think price increase because of demand. I think its more of cut production

Well demand did drop over the past year but supply was cut more so I agree with you.

In general, the Oil market is really centralized. The price is really manipulated. I think a clear volume chart would say more than the price :)