The New LeoFinance UI Doesn't Sit Right with Me

leonordomonol (56)in LeoFinance • 3 months ago

For those using the LeoFinance frontend, you probably noticed things have changed UI-wise. Not enough to call it an 'update', though the LeoFinance team insists on calling it that, but rather some kind of light refresh to how some buttons and graphical symbols are organized in a post card, and the notification function came along as a bonus.

All of those changes are inefficient and counterintuitive when it comes in practice. Spacing out those buttons along the length of the post card, shown below as an example, results in more mouse travel needed to reach to each one of them.

This is a significant downgrade from the older organization of having them huddled together in the lower-left corner, which, having it that way, makes the buttons readily available in your visual field without moving your eyes, as well as reducing mouse travel between each button. Not to mention, grouping them together gives off a much cleaner, more organized look on the surface.

This spacing issue isn't exclusive to those post interaction buttons, either. Just look at the profile icon, the LeoFinance icon and the headline of any post card out there and you'll see that they are dangerously close to the embedded image in a post card, almost clipping into the edge of each other's element. This creates the feeling of tackiness and, frankly, it looks cheap and jerry-rigged altogether. The older way of organization of those elements elicited a much more professional and clean look to things.

This is detrimental to how we look in terms of cleanness and element organization, as well as to how practical this new update is. The more I look at this, the more I wish we could get a legacy option to revert back. But hey, at least we got something of value out of this '''update''' which is the notification area.

Awesome, thanks for the feedback. I'm the one that implemented the changes that you don't like and welcome the feedback.

The big change made to the UI is to make it more reactive; in other words, allow the screen to flow based on the size of the browser. Previously if you shrunk the size of your browser, all sorts of ugliness happens. I wanted to solve that problem.

As a result, the margins of the screen are much more fluid and ideally adapt to the size of the screen. Unfortunately, sometimes this isn't done as well as it could. That's why I'm happy to receive your feedback, so that it can be made even better. Everything on the site is a work in progress, and as a community we value everyones' feedback to make it work the best for everyone.

Please continue to point out things that you like or don't like, and I'll look into how things can be improved. If you (or anyone else) has graphic design skills, I would love for someone to do a professional layout of the site. We actually talked about putting out a call for designers, and it's something that I think we'll do in the next couple weeks.

Hi, appreciate you taking the time to reply. I think this is everything I wanted to discuss with these changes in this post, but now that you bring up the browser aspect of things it makes it more interesting. Is it absolutely necessary to implement this kind of spacing and dimensions in the post card in order to make the webpage as a whole flow freely with different screen sizes? I don't think I've seen anyone complain about it, and other tribes seem to be doing fine when it comes to the UI department.

I think this can be made into a non-issue if settings to revert back to legacy UI is made available, those who suffer from wonky graphics can stay with the updated version.

I never had an intention to spread the icons as far as they are. Now that I know that it's a problem, I will find a solution that both works for smaller screen sizes as well as expands well for larger screens. It's just a matter of knowing what people care about.

I agree with @leonordomono's comment (see mine below). Also the number of notifications doesn't sit correctly in the circle.

My comments are related to viewing on a laptop screen rather than a phone in case that helps. 😊

I thought the same.

I don't like the tribe being on the right hand side either because now I have to look over there to see it when before it was right in my field of vision.

If we had an option to go back to the old version I'd definitely be using that one.

I don't like the tribe being on the right hand side

I don't understand what you mean by this. Could you provide a screenshot?

Yep. Sorry. That was a poor description. I think it's probably the first tag rather than tribe?

As far as I remember it was on the left side before so I didn't have to look for it. 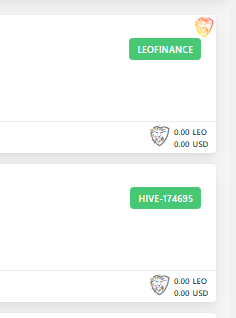 Ok, I understand now. No, you're right about calling it a tribe :) Yeah, it was sometimes on the left and sometimes on the right before, I believe. It varied based on which screen you were in. But it often didn't fit very well.

I'm curious what you mean by "didn't have to look for it". Is there something which you do which is now more difficult because it is on the right side?

I like to see which front end people posted from and upvote from that one, depending which one it is. When it's on the same side as the upvote button I don't have to look over to the right and can upvote more quickly if I'm going to vote on LEO which is most often the case.

I suppose it's only a split second difference but it's surprising what a difference it makes to ease of use not having to look over to the right right.

Congratulations @leonordomonol! You have completed the following achievement on the Hive blockchain and have been rewarded with new badge(s) :

Support the HiveBuzz project. Vote for our proposal!