Why Is Bitcoin Important? | Showcase Sunday 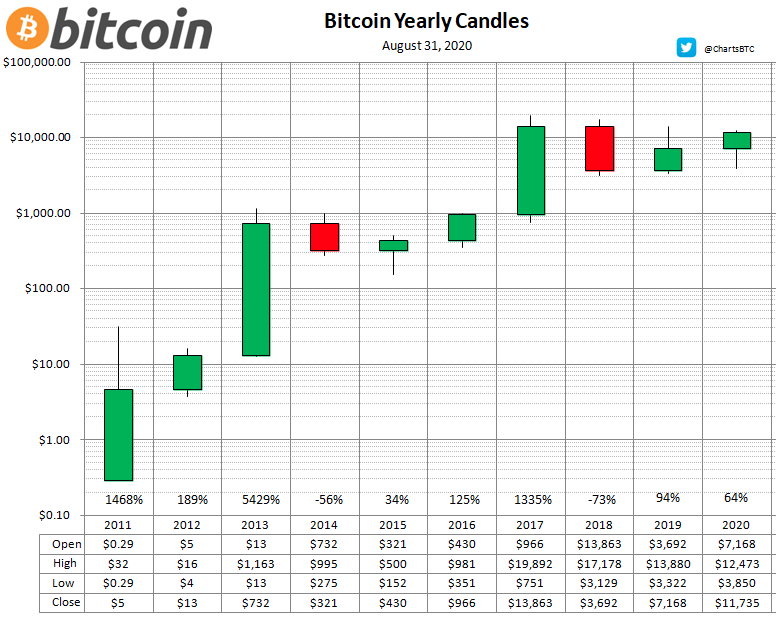 Bitcoin chart above is by twitter user @chartsBTC from last year. Each candle represents a year. That time when I saw the chart, I really liked it. Because it was telling the story. If we followed the pattern, we could at least hope some big moves in price were going to happen in 2021. We already know how interesting things unfolded in the first half of 2021 for Bitcoin. And we remain curious what the second half of the year will deliver.

I am no chart expert. But when I saw the chart, it wasn't difficult to conclude that 2021 is setting up to be a great year for Bitcoin. Of course, charts are not fortune tellers, patterns may not play out as expected. Yet, I still find this chart exciting for the future of the Bitcoin. We often think of crypto asset values in their prices in the market and how they are performing. For any investor, small or big, prices do matter as they have direct impact to their financial state. However, prices are not necessarily the sole criterion in defining the success of the asset.

Bitcoin has been successful. Yes, its exponential growth as an investment instrument did bring it fame, recognition, and respect worldwide. In my opinion though, its most important impact has been in bringing awareness about the nature of money, fiat, central banks, and financial systems to masses. Even the skeptics of Bitcoin have a better understanding of money today than they did a decade ago. Any explanation of Bitcoin without mentioning the nature of money is not complete. In fact, Bitcoin makes the most sense once the basics of traditional financial systems and their impact to people's financial well-being is understood.

A while back, the times when spam emails also had some substance, I received a spam email about Federal Reserve. It was an article explaining how US Dollars wasn't issued by the US Government but the private institution called Federal Reserve. How, US Government issued notes would say United States Note, instead of Federal Reserve Note, etc. While I found the article to be interesting, I didn't pay too much of an attention. I only remembered it when I dove into understanding money years later.

I am not really concerned whether Federal Reserve is a government institution or a private entity. They do a great job of confusing things. What is important though how they operate, what they do, and what impact is has on people's finances and personal wealth.

Bitcoin has arrived at the right time with a right solution. It has come as a response to the global financial crisis of 2008. The financial crisis that started with housing collapse in the US, brought down banks, large insurance companies, and more. Many large companies were bailed out, but the US government and the Fed. But the impact of the crisis on ordinary people, their savings, their pensions, their houses, and impact on small and large businesses was devastating. Many businesses went bankrupt and to this day have not recovered.

As an alternative the traditional financial systems, Bitcoin introduced a system where nobody should trust any one entity, there is a cap on the total supply of the money, and inflation is predictable and all participants of the economy are well aware of it. Most importantly, everything is recorded on the public ledger which provide the complete transparency. It is quite possible if Bitcoin came some other time it would have been as successful and popular.

Amazing thing about Bitcoin is not only this new money, the new way of transacting with one an other, but also the wave of decentralized projects that came after it being inspired by it. In a sense the decentralization of Bitcoin goes beyond Bitcoin itself. Monopoly of printing money has come to an end. Today anybody can print money. The question is if this money or project can solve problems and attract people to participate in these economies.

Hive would never be possible without Bitcoin. What Hive is taking on to solve might be a bigger problem than what Bitcoin was trying to solve. Not only Hive offers more efficient financial system, easy for ordinary people to understand and participate, but it also attempts to deliver the original promise of the internet. Internet is a decentralized system. Big money and big tech figured out a way to centralize it, and capitalize on human interactions, online activities, data, and feeding advertisements. By doing this these big money and big tech entities play a zero sum game. They let people do the all the work - create content, socialize online, share data, engage on various digital activities. All while the big monopolies make the ad revenues, sell user data and eyeballs. On top of this all, they also manage to collect fees for services. lol.

With decentralized blockchain tools like Hive, today it is possible to challenge these monopolies. We are still at early stages. There is more building to do. At the very least we provide alternatives to traditional web services, tools, and networks. With participation these decentralized system will grow and offer a better future, and a better alternative.

That is why Bitcoin is important!

I agree Bitcoin was started as a way to move control of money from the governments. However in my point of view, I think Bitcoin is probably not people's money anymore since larger institutions are going in and buying it up for the most part. So in a way, I think its more like digital gold and I tend to think a different crypto (maybe HIVE) can be the actual method of money in the future.

A while back, the times when spam emails also had some substance, I received a spam email about Federal Reserve. It was an article explaining how US Dollars wasn't issued by the US Government but the private institution called Federal Reserve. How, US Government issued notes would say United States Note, instead of Federal Reserve Note, etc. While I found the article to be interesting, I didn't pay too much of an attention. I only remembered it when I dove into understanding money years later.

The biggest difference between fiat money (and powers who print it, distribute, or better say "own the system") and Bitcoin is that the first ones don't want that you UNDERSTAND how it works... and the second ones INSIST to teach you how it works, as when you understand it, you will never look back....

I have picked this post on behalf of the @OurPick project and it will be highlighted in the next post!

Yes, it does seem traditional monetary systems are set up to confuse people and simply trust the so called "experts".

I came across a tweet from a lady that claims to be a banking and finance expert in the U.S the other day, this was the tweet... My response to this was that, ....we've learned about the existing financial system by living in it, we've realized how erratic it is by many ways and that is why we chose to opt into bitcoin.

At this point in time I don't know how someone who claims to be a finance and banking expert still fails to see the superiority in an open inclusive transparent immutable financial system over the one that isn't and has failed woefully over the years, going through the entire thread she sounds as if though she's not part of this world of devaluing economies.

I would flip the questions and ask those who claim to be experts of financial systems and hate on bitcoin, why are they so arrogant and won't learn how bitcoin actually works. :)

It is always good to learn and gain more knowledge. That doesn't mean now we need to require people get college degrees on finance. Most don't really care about details how financial systems work, nor should they. Problem is governments and central banks continuously took monetary actions that were not in favor of people, who simply trusted those in control would do the right thing. Emergence of Bitcoin exposed the flaws of the traditional financial systems. Many understand the basics now that fiat money is not backed by dollars, fiat is money created on debt, fractional reserve banking, money is created out of thin air by monopolies like Fed, etc.

Bitcoin thrives despite all the fiat attacks, fud, energy attacks, state attacks and shitcoin attacks, none of these other shitcoins could stand up to that! That’s why I put my money into BTC and nowhere else

well put. I agree. I think everybody should have some btc.