The link between Cub Finance (CUB) and LeoFinance (LEO) 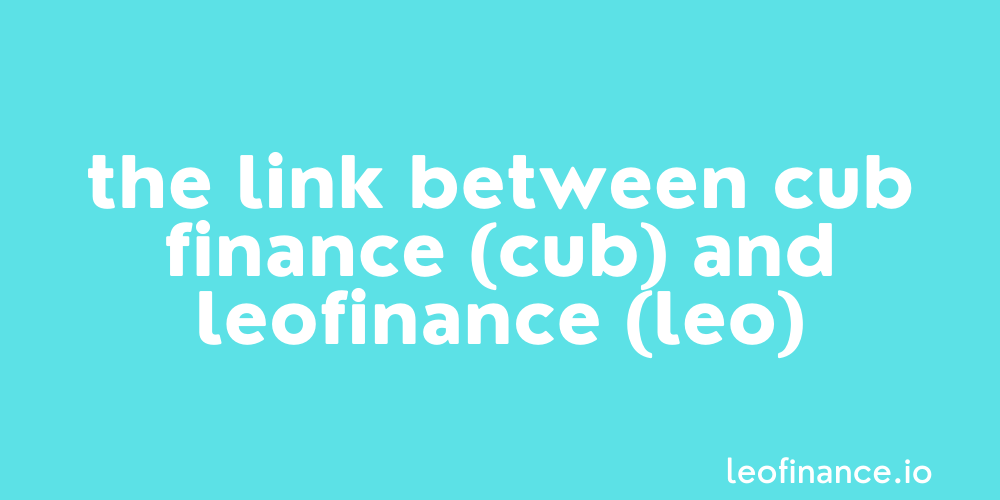 Discover the way in which Cub Finance (CUB) and LeoFinance (LEO) are forever linked.

By now, there’s no doubt you’ve heard that Cub Finance is the sister project of LeoFinance.

While LeoFinance started as a web3 social media platform known as Medium on the blockchain, the overall project has grown into so much more.

With a mission of continuously expanding the Hive community’s userbase and adding cross-chain value for its token holders, the move into BSC-based DeFi with Cub Finance was a logical next step.

This section of our Cub Finance (CUB) guide will discuss the role of each version of the LEO token and how to then easily wrap into bLEO for use on the platform.

The LeoFinance suite of tokens

When it comes to tokens within the Cub and LeoFinance family, everything goes through the LEO token.

LEO is the native token of the entire LeoFinance ecosystem.

Its distributed via a rewards pool system similar to HIVE and is used to pay users for publishing and curating quality content on leofinance.io.

Natively a Hive layer-2 token with a home on the Hive-Engine exchange, LEO also acts as a bridge to other blockchains.

The wLEO and bLEO tokens

This bridge is achieved via wrapped tokens such wLEO to Ethereum and bLEO to Binance Smart Chain.

Wrapped cryptocurrencies allow you to use tokens on blockchains to which they are not native.

Thanks to wLEO and bLEO, members of Hive’s LeoFinance community are able to seamlessly cross to the Ethereum and BSC blockchains, taking advantage of external dApps such as DeFi platforms.

With a bridge to Binance Smart Chain completed by wrapping LEO into bLEO, this is where the Cub Finance DeFi application and CUB token come into play.

All facilitated by the BEP20 CUB token used to enable use and reward liquidity providers.

How to wrap LEO into bLEO to use on Cub Finance

Wrapping LEO into bLEO allows you to move from the Hive blockchain based LEO, to the Binance Smart Chain based bLEO.

Opening up LeoFinance community members to the exciting world of yield farming on the low-fee Binance Smart Chain.

Ultimately, everything is about the LEO token

This section of our guide to Cub Finance (CUB) has shown how the LEO token is central to facilitating the link between Cub Finance and LeoFinance.

The Cub Finance platform has pushed LeoFinance closer to achieving its mission of expanding the Hive community’s userbase, while adding value to LEO token holders.

In the end, everything is about the LEO token.

Best of probabilities to you.

Direct from the desk of Dane Williams.

Why not leave a comment and share your thoughts on the link between Cub Finance (CUB) and LeoFinance (LEO), within the comments section below? All comments that add something to the discussion will be upvoted.

This Cub Finance (CUB) blog is exclusive to leofinance.io.

First I'd like to thank you for your post. I have used $LEO in the past to bridge to and from Hive and BSC, but it was something more instinctively than actually getting consciousness on the great value of the $LEO token.

Most of my capital lies within BSC so to put it inside Hive in the past, I used to send it to my Binance account, there I've bought some $HIVE and then I withdrew it to my Keychain & lately HE account. Quite a ride!

Now thanks to $LEO token, I just have to buy some bLEO in CUB Finance and bridge it directly into LEO and voila!. One awesome use case for $LEO token.

I sincerely hope that more and more people find LEO useful and the ecosystem to grow much more in the years to come.

It feels like we talk in our own little echo chamber on Hive...

Because that's exactly what we have been doing!

But thanks to LeoFinance and the ability to move into bLEO on BSC, we're finally opening up to the world.

Awesome to hear a real story about how the link between Cub Finance and LeoFinance is helping us escape the Hive bubble :)

The direct connection between Leo and Cub creates a synergy that makes investors on both platforms add value to both projects. In such a way that a large % of the Leo community supports CUB by investing in its yield farming to obtain dividends as a reward even in BNB, in the same way that people who invest in Cub without being members of Leo end up being it, considering the enormous potential it offers them, especially by adding value to the community due to their own knowledge or experiences. There is still a long way to go but the bases are very well established. I find added values ​​to these two projects that in comparison with many others do not have them.

The LeoFinance team and community are a huge advantage for Cub Finance.

Not only do you have access to support, but a whole range of other ways to earn crypto on top of your yield farming.

In my opinion, the link between Cub Finance and LeoFinance is a unique selling point that needs to be promoted more.

The bridge is a great thing. By earning LEO on LeoFinance, they can start their journey on Defi. The HIVE earned can then be spent on BSC bridge to get some BNB for gas fees.

Just to be clear, the BSC Bridge that you've linked here is another 3rd party bridge that users can use to buy BNB directly with HIVE.

This is not to be confused with Cub Finance's LeoBridge which uses LEO to bridge ERC20 tokens to BEP20 tokens and vice versa without permissions.

But yep, to use Cub Finance, you need BNB to pay gas fees on the Binance Smart Chain network.

For Hive users who have liquid HIVE and just need a small amount to pay fees on Cub, that tool is handy.

There is no doubt that cub finance is a good project.

I am also sure the project has use case, the only problem I see is awareness about the project

The crowd on cub finance is too homogenous.

The team needs to do what everyone else does and pay for marketing.

There's no getting around it.

In the meantime, we can play our small part by publishing SEO optimised content targeting a range of BSC and DeFi related keywords.

That's what our Cub Finance (CUB) guide is all about.

What's the difference between the wleo and bleo.
Are all not from leo finance token

There is only 1 LEO token.

wLEO and bLEO are simply 'wrapped' versions of LEO that allows you to use the functionality on other blockchains.

wLEO is an ERC20 token for use on the Ethereum blockchain.

bLeo is a BEP20 token for use on Binance Smart Chain.

Thanks for the explanation

It has nothing to do with your post. But, Let's me ask an advise.
To whom should LEO Power be delegated to make a good profit?

It depends. As of right now I can think of the following options

I just replied to this on your latest post.

Hello, I am sorry for the offtopic comment.
I am getting downvotes from a user and it seems he is spamming the negative vote to my every content.
Initially, I thought that it was because of my content but it is getting annoying now. I was surprised that many other users are getting the same issue.
Could, You please tell me the way I can report that to the mods? I try to mute him but he is still able to react to my articles.
The worst thing is that IDK why but his downvote has a big impact on the SEO.
This is the link to his profile:
https://leofinance.io/@anddumbcunts
Again, I am sorry for the off-topic reply. I hope you understand.
THANK YOU!